Come From The Shadows

Come From The Shadows: The Long and Lonely Struggle for Peace in Afghanistan

“The Afghan people have friends around the world who have courageously joined us in our fight for our freedom and civil liberties, but few have been as devoted to our cause as Terry Glavin. His journalism gives our silenced voices the power to be heard in the West.” – FAWZIA KOOFI, PARLIAMENTARY VICE-PRESIDENT OF AFGHANISTAN,  AUTHOR OF LETTERS TO MY DAUGHTERS 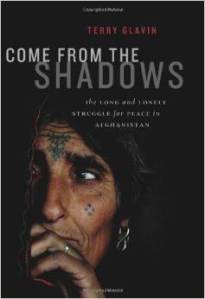 “The best parts of Come from the Shadows involve his travels in the country, often in the company the Abdulrahim Parwani, a remarkable Afghan-Canadian man, well drawn in Glavin’s text. We meet democrats, partisans, activists and scholars. Some are powerful, some simply brave.” – MICHAEL PETROU, MACLEANS.

“Terry Glavin is the West’s most eloquent advocate of the cause of Afghan liberty. His voice is a powerful counterweight to the many others who relentlessly counsel abdication of that cause.” – SOHRAB AHMARI, CO-EDITOR OF RE-ORIENT,  AN ANTHOLOGY OF ESSAYS BY YOUNG MIDEAST REFORMERS.

“The best journalism exists to refute self-serving and self-satisfied prejudices. With reporting from the ground and historical scholarship, Terry Glavin demolishes our illusions about Afghanistan, and produces a book that is at once an assault on received wisdom and a humane defence of the rights of subjugated peoples.”- NICK COHEN, AUTHOR OF WHAT’S LEFT?, COLUMNIST, THE INDEPENDENT.

“Glavin’s forensic demolition of pious myths about Afghanistan and fierce defence of liberal values is persuasive and exhilarating.” – OPHELIA BENSON, CO-AUTHOR OF WHY TRUTH MATTERS.